Here is the link to the survey.

If you'd like to see the blog I created to address the image needs of film studies students, please go here.

Question 1: What is your area of study within Communication and Culture?

Seven out of eight respondents were in Film and Media Studies.

Question 2a: Are you a Master's or PhD student?

All respondents were at the PhD level.

Question 2b: What year are you in your studies? 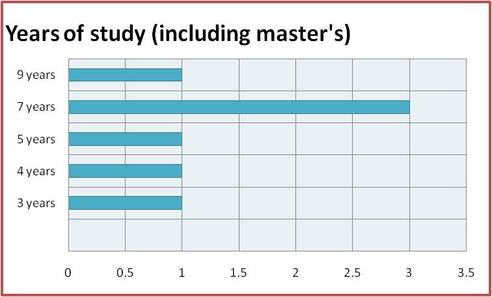 The average years of post-graduate study for this group was 8.4 years.

"The use of moving pictures in early cinema circa 1900. Early adoption of computer technology by experimental filmmakers/video artists in the early 70s."

"audience reception and use of media, particularly film stars"

"I study and produce media, and my dissertation is on media, celebrity, and the 'obesity crisis.' "

"I work mostly in cinema, but also do outside work in television (publishing on TV has been independent, outside any CMCL-driven work). My dissertation is going to integrate city space, technology, and masculinity within the action film genre. Because it is such a visual genre, my need for film stills (screen grabs, etc.) are really important. I also want to establish some information about how the three-pronged framework I'm using has appeared in visual culture more generally (man as machine, city as machine, man as city, etc.). Historical image archives would be extremely helpful for this -- kind of the pop culture of bygone eras, if that makes sense."

"Shakespeare and youth culture, particularly through film and online media"

"I study discourses of American exceptionalism within American presidential rhetoric and within the contemporary public political culture."

Question 4: Do you use images in your research? 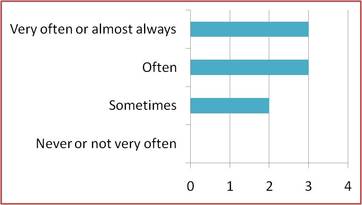 Question 5: How do you use these images? What kinds of evidence do they provide?

"Visible evidence of filmic practices. To prove provenance of films."

"Images to illustrate my points; because I am working with a film star whose films are almost entirely lost, stills and publicity images are essential, since they are often the only visual artifacts that convey any information about the lost film."

"I often use them as examples in conference presentations and papers."

"I have used comparisons between contemporary images alongside historical images in order to explore changing cultural contexts. Also, I have used behind-the-scenes visual images from DVD commentary to explore modes of production around men and technology (a forthcoming article in Cinema Journal). I also use images to discuss "bodies" across different spectra, from gender to the abstractness of visceral action to reception and consumption of those body images."

"Close readings of images as well as context for larger arguments"

"Often used to illustrate a specific point; serve as evidence of continuation of some kind of star image or persona replicating over time"

"I might use them to bring the paper to life, to show a picture of a president giving a speech or of the size of a crowd."

Question 6: What are some of the problems you encounter when using images for your research?

"Often the photos are removed from newspaper articles due to copyright. My areas of research are often not scanned or easily locatable online."

"Mainly, accessibility (or lack thereof) and trying not to use the same 10 or 12 images that appear everywhere online. Trying to get image captures from online video."

"I work with a lot of very recent media, so sometimes it's difficult to find or make stills."

"Main problem is converting screen grabs to proper publishing formats (dpi, resolution, size, etc.). Also, images on databases tend to be pretty standard, not the fringier stuff I tend to need, in terms of pop culture and popular genres."

"Honestly, I don't fully understand the copyright and fair use rules for image use in my writing; I'd like to incorporate more images into my writing, but I'm never entirely sure whether film stills or other images are legally fair game or not"

"--Having to get rights to reproduce --Fees involved with this --Finding images in other places that online; finding images that haven't been reproduced hundreds of times already --low image quality from image capture of motion pictures (which I can only do as a screen shot) --my computer's refusal to let me do screen shots when a DVD is in my disc drive; means I have to try to find the film online somewhere"

Question 7: What are some databases/resources that you use frequently for finding images? Also, please rate each from 1 (least satisfied) to 5 (most satisfied). Please use the comment box to further explain your preferences.

"Ebsco Image Collection--1; nothing unique Not aware of any other pertinent databases"

"I often try to make my own [film stills] from various media."

"To be honest, I can't remember where I've looked. My searches tend to be pretty haphazard, kitchen-sink type of searches. I go to Google Images a lot because you SEE the images out of a big sample and it's just quicker and easier. Most of my images come from screen grabs that I then need masses of help converting."

"Google - 5 I don't usually use the library resources to access images. I am not sure exactly what avenues are available to me to find images through the library. Microfilm/ Microfiche, I suppose?"

Question 8: How do you construct your search when using these databases?

"Search for the subject's name; if I need to narrow search, which I have rarely had to do since there are so few images on databases, star's name and film title. The internet has been a far, far more useful source of images, but the only really unique images I have came from research trips to New York and Los Angeles."

"As I said, I'm not terribly organized or methodical, mostly because I'm looking for contemporary action cinema images and these are pretty rare in my scholarly/academic databases, so I go for the most public forums in order to have an easier time finding images. I've found images this way and then contacted the original source of the images to get permission to use in my publications. Clearly, I would benefit from some tutorializing (if that's a word!) on how to do focused images searches. So, I look forward to whatever you and Angela put together."

"by using the most important key terms, as in a google search."

Which of the following instruction topics would be most useful to you in your research? Check all that apply, and fill in the comment box for anything else you would find relevant: 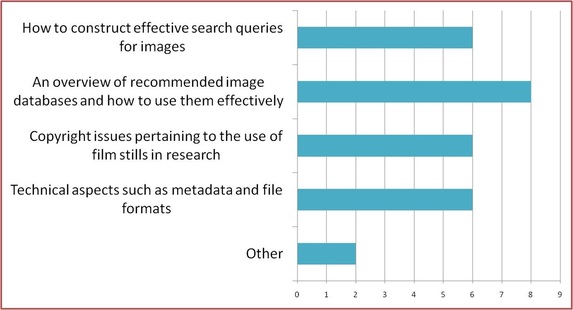 Other:
"conversion of image files to standardized publish-ready images"

"I would like information about all of these topics!"

How else can the library help you in your research?

"This is a great project. Thanks for working on it."

"Re-hire ----- who used to work in the Media Services (was the Kent Cooper Room); part of her job was to help set films aside for instructors. ----- is constantly overloaded, often orders things too late, and is grumpy. Not having an efficient media services in the library is detrimental to both teaching and research!" [author has edited out the names for privacy]

"Some sort of tutorial simply letting us know about the existence of these image databases would be the main thing for me."

"The library is always available for help whenever the need arises. I really appreciate that. I really can't think of any particular way in which I have found it lacking and in need of improvement. Keep up the good work!"